IT Jobs Market Update – Has Hope Made a Surprise Comeback? 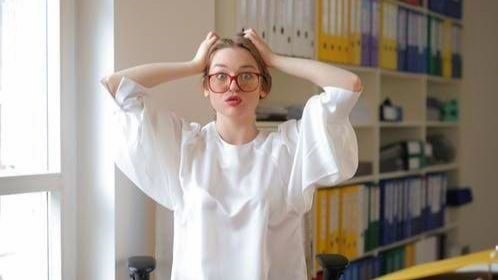 It’s been 6 months since the full effects of Covid started hitting the jobs market. Here at Balance we were hit hard. By April, literally every job we had was cancelled. Every. Single. One.

Most of our customers were affected in a similar way to us. Their customers were not spending, many of them let staff go and none of them were hiring. The employment market tanked. In roughly 6 weeks from mid-March, the overall number of job ads on Seek decreased roughly 70% from 147,000 to 45,000. IT job ads were only slightly less affected, down by 60% from 15,000 to 6,000. 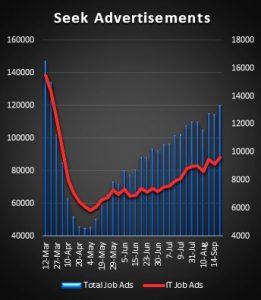 Jobkeeper was a game changer, it really stabilised things. And in the ensuing months, there has been a slow and solid recovery. The market has improved from its low point by over 160% and is now down 18% from the pre-Covid peak with 120,000 roles advertised. Interestingly IT roles have recovered only 67% and are still down 37% from their pre-Covid peak, with around 9500 ads live.

So why have IT jobs suffered more than rest of the market?

There are a few theories as to why IT jobs have been disproportionately affected:

What is Balance seeing?  It’s a 2-speed market.

For Developers, Cyber specialists and Data Engineers/Scientists the market is tighter than ever. Candidates have multiple offers and rates haven’t moved all year. As confidence improves and lockdown 2.0 winds up, I would suspect the supply situation is set to deteriorate. I predicted in The Download in March that an absence of skilled immigrants would affect the market. We previously welcomed around 2000 skilled migrants a week into Australia. Their absence is starting to be felt.

Conversely if you are a Business Analyst or Project Manager, there is a strong over supply of talent. Apart from individuals with specific skills (e.g. energy/distribution/cyber experience) there are many talented people currently looking, and rates are fairly soft.

We are also seeing a flight to safety. Most people with a stable job are very thankful and have no intention of going anywhere. Those that are actively looking for work prioritise job security as a key driver in their choice of role. Government is currently particularly appealing. Unless an employer has a particularly compelling proposition, head hunting can be extremely unrewarding at present.

Unsurprisingly the darlings of the tech sector, Atlassian, Afterpay and their ilk have hired furiously over the last 6 months, seeing this as a once in a generation opportunity to hoover up great talent with limited competition. At the other end of the spectrum small tech start-ups have struggled to secure funding and much of the growth in the micro sector has stopped.

At Balance, we’re now seeing very solid levels of demand. Many customers who had stopped hiring are engaging our services once again, though not yet in the same volume. Some customers, especially those in the travel sector are still quiet. Surprisingly, we’ve picked up a bunch of new customers. Most of the roles we are working on are Cyber, Developers and Infrastructure Engineers. Visit Balance jobs to take a look at our current roles.

Interestingly, we have seen contractor numbers remain very stable, and over the last 3 months demand for contractors has started to increase. Our experience from previous downturns suggests we will see further demand for contractors before we see strong demand for permanent staff. Employers tend to shy away from longer term commitments, often employing people on short term engagements using Capex to deal with high priority issues.

Overall, we feel cautiously optimistic about the next 12 months, even more so after the release of the latest unemployment numbers. And we believe things will improve further once Victoria’s lockdown finally ends. We’re far more upbeat than 4 months ago.

So, what does the next 12 months look like?  At a macro level there are 2 possible scenarios:

For us at Balance, we’re thankful that all our team remain with us and in good health. We are grateful for the loyalty of our customers, contractors and candidates. We are happy to offer free career guidance to anyone who is currently between roles and struggling to figure out how to secure their next gig.  Reach out if this is of interest.

Join over 12,000 IT professional who receive regular market insights and updates.